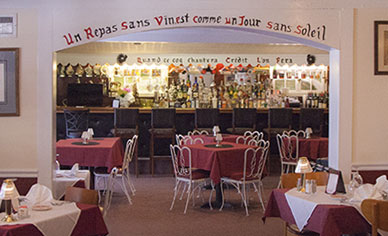 Chez Pierre’s doors opened in April of 1964 by E. Joseph and Pierrette Baldwin.  While serving in the U.S. Army right after WWII, Joe met Pierrette in a small town called Nancy, France.  Pierrette had grown up in the restaurant business since her parents operated a cafe where many U.S. soldiers visited.

Upon returning to the States after marrying, the couple found an abandoned restaurant in a rural part of upstate New York.  51 years later, along with Joe and Pierrette’s four children and the children’s spouses, Chez Pierre has become one of the longest family operated restaurants in the area.  Visit us and see why a trip to the “Chez” is like visiting family!